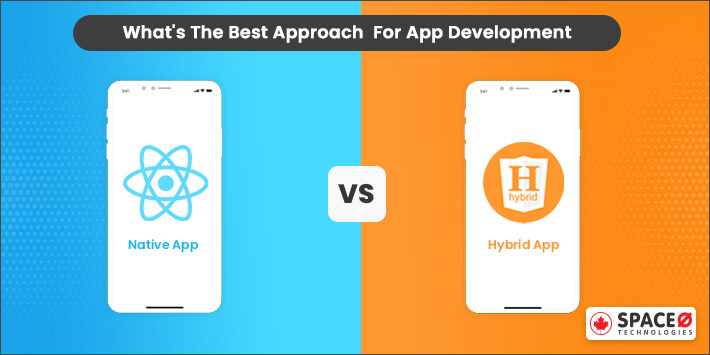 As per the research of Statista, consumers downloaded 218 billion mobile apps on their connected devices. The number is quite huge enough to say that mobile apps are taking the world by storm.

Are you an entrepreneur and want to launch a successful mobile app? Are you concerned with the factors like app downloads, features, speed, return of investments, and target audience?

Deciding on the right app development approach can save your investment and time. While choosing the right approach, a dilemma arises, whether to develop native apps or hybrid apps?
However choosing one involves factors like the goal of the business, type, requirements, and complexity.

To help you in deciding one, we have prepared a guide of native vs hybrid apps. This blog will answer your basic questions and help in choosing one approach.

What is Native App Development? Native apps can take full advantage of device features such as camera, SMS, GPS, microphone, and device speaker. For instance: WhatsApp is a native mobile app as it has different interfaces for iOS and Android.

Technologies Included in the Development of the Native App

If you look further to develop native app development, it’s worth understanding the technology stack of both platforms. The app developers code native Android apps in Java or Kotlin, while the iOS native apps in Swift or Objective-C.

Furthermore, let’s take a look at its pros and cons.

Pros and Cons of the Native App Development

What is Hybrid App Development? Hybrid apps are a combination of native and web applications. They are specifically built using web technology languages like HTML, CSS, Javascript, React Native, and Xamarin.

Hybrid apps offer the approach of writing codebases once and run across multiple operating systems. These apps can be installed similarly to native apps on mobile devices.

Hybrid applications have access to the internal application interfaces (APIs), which makes fairly complete access to device features. A hybrid application offers compatibility with web apps. These hybrid apps run on the mobile’s browser and appear with UI features as native apps. In hybrid mobile apps, it becomes easier to scale up and maintain the app for the overall purpose, which results in saving time and cost.

For instance Gmail: It is using native elements and HTML within a single application to provide a seamless user experience.

Technologies Included in the Development of the Hybrid App

Here, we’ll look for the most trending hybrid technologies to build cross-platform apps.

React-Native is a Javascript framework to build beautiful web apps or hybrid apps. This framework helps Javascript programmers to develop apps for different platforms like Web, iOS and Android. React-Native is especially used to build for a great UI and faster execution of apps on the platforms.

Ionic framework is an entirely open-source SDK to develop hybrid app development. It is a complete app development toolkit, which offers feature-rich front-end UI components. This framework also offers the best compatibility with any Javascript framework such as Angular, React, and Vue.

Pros and Cons of the Hybrid App Development

Looking for an expert mobile app development team for your project? We have mobile app experts who have years of experience in delivering successful mobile apps.

Let’s differentiate the difference between these two types of apps to provide a clear idea about both types of apps.

Essential Factors to Consider in Choosing Between Native or Hybrid Apps

Let’s have a look at the necessary factors you should consider while choosing to develop an application between native or hybrid. The app stores like Google Play Store and iPhone App Store assure the quality and safety of the app before launching for the users. While hybrid apps lack behind in the security protocols as these apps are built using native wrappers and third-party frameworks.

Scalability is an essential factor, and you shouldn’t neglect this factor. The native mobile app offers better scalability in comparison to hybrid apps. If your app majorly communicates with the core components of the OS and for the future, you plan to update your app, then definitely native app becomes effective for you. Although hybrid apps can also access device features but have limitations.

Building hybrid applications takes less time in comparison to native apps. The hybrid apps use a single code base to run everywhere, which ultimately reduces the duration of development. And developers don’t require to build mobile apps specifically for two different platforms. While in native, mobile apps take a long time and increase the developer’s task to build similar versions for Android and iOS platforms. Thus, if you plan to create an application in a short-term duration, a hybrid app can be a suitable option.

Native apps provide seamless integrations due to their better availability of resources for applications. For example, integration with Siri voice to access the application over voice command. While in hybrid apps it is difficult because they are built using web technologies that have certain limitations.

These are the critical points that require attention when planning to build an app and confused to pick the platform. As we have seen the different aspects of the native and hybrid app, it also depends on requirements, goals, and business types. Mobile application development doesn’t depend on the type of applications, it actually depends on your thoughts and ideas on how you want to build your application for your users.

To have better clarity, it is recommended to have general ideas about features, development time, cost, platform diversity, and accessibility. All these factors will help you to choose a suitable approach for app development.

Furthermore, we will guide you to decide which app is best for your business. We would advise you to go through with each concern step, which will ease all your problems.

Native or Hybrid: What Type of App is the Best For Your Business?

Building a native app or hybrid app totally depends on one’s business requirements. No development approach is wrong, neither native nor cross-platform development. It depends on the usability and the reason for which they are building the app.

The companies need to identify the exact business goals for which they are interested in developing the app. Every business may find different mobile application development as their perfect solution.

Maintaining several versions of the application in native apps is definitely profitable if you have huge audiences like Instagram or Facebook. Nonetheless, for a limited audience, it becomes a tiring task and results in high cost also. Hence, hybrid apps are upfront choices for most businesses to reduce maintenance and put all users at the same pace.

Your decision-making on choosing an app approach is also dependable on the features you want to include in your application. Hence, you need to specify the features perfectly well before building an app, and you can’t restrict app growth due to app type.

However, there is no particular answer to the question “which is best from native or hybrid mobile app”? Certainly, it totally depends on your principal criteria and business goals. Let’s check the application examples of hybrid vs native apps.

Below we’ve taken some of the famous Android and iOS native apps to manage the business operations to scale the growth, An app similar to basecamp is built for easy management of the project. Basecamp comes with the feature to upload files, communicate and collaborate with your team members. Here, performance is a priority because users will need real-time interaction and updates from the app. On top of that, security could be the second reason to choose native app development. 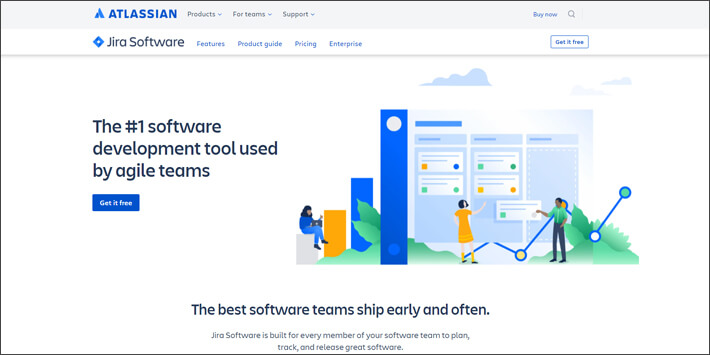 Jira tracking application is used by a million businesses. This app is primarily built to track the team planning and creating the project development. This application similarly functions to manage project operations, hence they have chosen native app development to provide better performance and user experience as well. 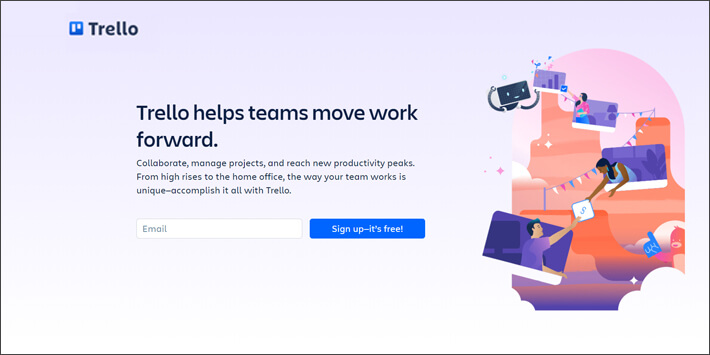 This one app is built to manage all types of business activities in a company. In addition to that, one can even customize the app with their needs and work styles. They have chosen to build native apps because of security and providing high performance to carry out multiple tasks at a time. It helps you to manage the data over cloud storage and provides you with effective access to the core components of the mobile device. It manages the business to escalate the usage of physical record copies. Although, the app provides powerful performance to access and process a huge amount of data without any technical failure. If you’re looking to develop a similar storage app like Dropbox which can efficiently store huge business information, then choose the native app development approach.

The to-do list app manages your business operation on a daily, weekly, or monthly basis. It doesn’t need any heavy configuration and technicalities. If you want to build similar apps like to-do-list apps, then hybrid app development is the best approach. The Amazon App Store for Android is an app store for the Android operating system operated by Amazon.com. This app is highly used across the globe and offers the best ways to streamline the process of buying and checking the different products without any struggle. As you know, you can access Amazon on mobile as well as on the web browser. This app is an excellent example of a hybrid application. A remote POS system can help you manage the restaurant business operation and helps your manager to streamline all the processes in your restaurant. Building hybrid apps for internal operations of restaurants helps them to manage cost and they don’t require to manage a web app and mobile app differently.

We hope the above-mentioned examples of native and hybrid apps give you a proper idea of “what type of application can choose according to the requirements.” Mobile apps play a vital role to manage multiple tasks at a time. The major difference you can consider here is the features you are going to consider for your app development that ultimately leads you to the perfect approach.

Want to know which type of app you want for your business? Need guidance? We have expert app developers for your help.

Still, have doubts? You can check our frequently asked question section for further details

Facebook is an example of a hybrid app, as it was specifically built to be accessible over every platform. You can download the app easily from the  Apple App Store/Google Play Store or can access it from the web browser.

Certainly, there is no specific answer because native apps and hybrid apps both have pros and cons. It ultimately depends on the business goal, requirements, size of businesses, and target audience.

For building the native app in Android, you need to decide the features, flow, and integration as well as user navigation to provide a complete product for the users. After creating a wireframe, then you approach an app development team.