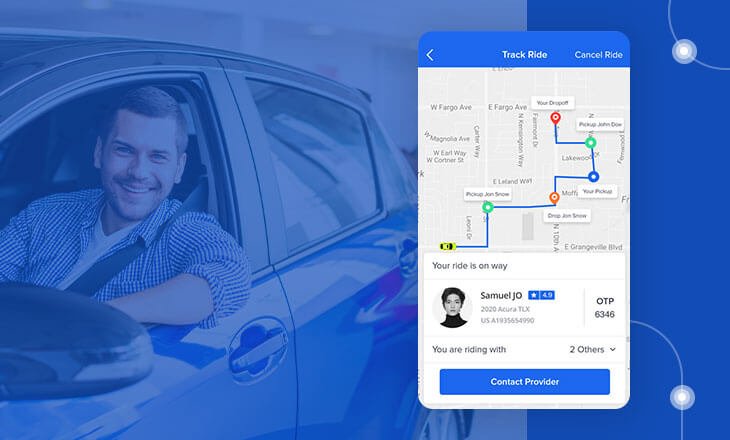 This blog is for those taxi startups and taxi business owners who wish to make it big with ride-sharing app development. We have rounded up 3 lessons from Bolt (previously known as Taxify) that you should instill in order to change the game.

Unless someone lives under a rock, everyone knows that the taxi business has been completely transformed with the advent of ride-sharing app development. Various apps like Uber, Lyft, Bolt, Gett among others have become the top players on the field.

Uber has had a monopoly in most of the nations but is slowly receding from its top position. It has made mistakes that have benefited its competitors in many ways. One of them is Bolt, previously known as Taxify.

Bolt’s CEO and founder, Markus Villig has said (in an interview with TechCrunch) that Bolt has entered the taxi booking app development to fix the problems of higher prices and poor service created due to monopoly. Well, it might take two to three years to do so, but as the trends show, they are doing remarkably well.

Let us walk through some interesting details about Bolt that will make the lessons even more appetizing.

Our mobile app developers have experience in developing feature-rich apps that are tailor-made and easy to use.

3 Lessons to Learn from this Ride Sharing App like Bolt

To drive ahead of other ride-sharing apps, it is focusing on business strategies that benefit the users, drivers, and the company.

Taxify drove away from its old name in December 2018 and rebranded itself as Hopp in London. It signed up for various drivers but no passengers. It rebranded to the name Bolt all over the world but whether Hopp will also be rebranded to bolt is not sure yet.

The on-demand taxi app changed the name to avoid confusion with another company with the same name. The name – Bolt, implies electricity and speed.

By removing the word ‘taxi’, they wish to clear their intent of branching out to other transport means and not just cars. They have already expanded to scooters and plan to add other individual transport modes and link public transport. Basically, the name implies that they are not just a taxi-dispatch app anymore.

If you plan on ride-sharing app development, even you should decide on a name that is clear and yet clears the intention of your business.

3. Using its late-coming as an advantage

Even though the ride-hailing app is a late entrant in the market, Villig believes that it could use this to his company’s advantage. How? Well, Bolt has spent significantly less to educate the market about its services and gained drivers and users quite quickly.

It has also learned from mistakes shouldered by others. As an illustration, Uber made many mistakes in the haste of becoming number 1 that it barged into cities and ran until it got shut down (sometimes for months) due to regulatory issues. This helped Bolt to understand the regulatory standards of various nations.

Also, according to The Information, Uber has spent over $2 Billion on its own self-driving car efforts, which has brought no ROI yet. Bolt plans to partner with the successful results rather than attempting this on its own.

Being a Taxi service startup, even you can adapt these lessons to boost your business exponentially.

Why us? Well, we promise to convert your dream app idea into a reality. We are a prominent taxi booking app development company and have experience of developing over 50+ taxi booking apps and solutions.

Feel free to consult our experts regarding your app idea and any queries regarding app development timeline or cost. This consultation is free of charge and our expert will get back to you within 48 hours.