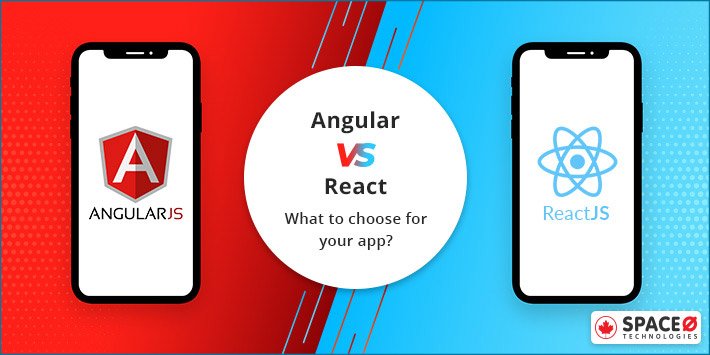 You’re here which means, Angular vs React is your next battle and these two have topped up the list of your javascript frameworks for app development. This also means these two are already the best in the world and different from all. Great. Your half work is done and dusted.

Now, the question is what makes these two different from each other?

No doubt both Angular and React are creative, well-supported methods that are useful for front-end applications out of a huge array of Js frameworks, with constantly newer versions coming in.

However, selecting between Angular and React is a source of debate and it has been going on for more than 7 years. Yet, most of the time, front developers find a hard time choosing the best framework, especially when it comes to a single page application (SPA). So let’s prolong this debate ahead and analyze in this article guide which can be better in what situation. Ready? Scroll down.

Before we get into details of React and Angular, you might want to know if we could work around without java-script frameworks, so to put in simple words, yes, you can work around without it. You can perfectly code without them with the help of application code editors.

But do you have so much time for it?

Because a well-chosen framework will make your work and decision a lot easier. Not only that, but they also are free and open-source, so there’s no risk in trying as history proves. Also, javascript works on both – client and server sides. It helps design an enriched user experience with a variety of features to modify application pages in real-time.

Owing to the combination of their interoperability and flexibility Js frameworks are favored over other programming languages. The JS libraries offer good scalability, a better functional solution, and platform independence. Out of all frameworks, Angular and React are to be known as the most powerful and popular for your dream app ideas.

So let’s understand what exactly React and Angular stand for.

Angular is a full-fledged open-source front-end software platform focused on JavaScript which provides an API – that is primarily developed by Google, a group of individuals and companies to solve many of the difficulties faced in creating SPAs. To know it’s validity and reputation, let me tell you that Forbes and Upwork are using Angular for a long time now.

How Does Angular JS Work?

The Angular JS framework first reads the Hypertext Markup Language (HTML) file which is loaded with additional custom HTML elements, allowing to import CSS files. Then, AngularJS interprets such attributes as instructions for linking portions of the page input or output to a specification defined by regular JavaScript variables.

In simple terms, as a template language, Google Angular functions in the task of providing instructions, reducers, browser extension, HTML extensions, and enabling a range of components to be created and reused in programs. It also provides a router that automatically detects errors, risks, and typos.

React is a JavaScript open-source Javascript library that uses some features of ES6. A library for building user interfaces and CRUD (create, read, update, and delete). The idea is introduced and operated by Facebook and a group of independent web developers and companies. The React framework is the option for a JSX developer community with its superset typescript to create a high-traffic and interactive web app for different purposes. It is considered the fast-growing Javascript platform, with more than 1000 Gitlab contributors and searches.

How Does React JS Work?

ReactJS is the platform that simply functions as a view – indicating that the elements of framework React alter and update what the user sees. The React component handles the job of bringing the HTML within the website to show the user data flow to the UI.

However, React idea is mainly concerned with rendering property data to the virtual DOM (Document Object Model), so creating React Software usually requires utilizing external libraries to manage and route (React Router). That’s what only it holds everyone back as a downside.

Statistics: If you believe the ranking data, in the comparison between React JS vs Angular, React has more significant downloads than anything and is the most common choice among all frameworks holding 99 Github score.

Does it mean, React is also suitable for your needs and landscape? Not necessarily.

React and Angular, both are empowered in different areas along with popularity, growth, and user interaction. Follow this comparative study of parameters to learn about the most common JavaScript and what they each have to bring for you.

A Detailed Comparison of Angular and React

Want to build an app using Angular or React, but no idea where to start?

Don’t worry. Our team have got your back (and front too).

Pros and Cons Of AngularJS and ReactJS

If you’re still confused about which front end framework fits your project, we have made the list of circumstances when choosing React and Angular. Consider the comparison aspects while selecting a JS code framework for your projects and contact app development companies for better support.

When to Choose Angular?

Hence, using Angular in the above cases is a more suitable approach.

When to Choose React?

Thus, React is proficient in delivering performance in the above-mentioned points.

Tough to choose one stack for your app development?

What is the Future of React and Angular?

If you need a short answer to React vs Angular which is better for the future, both frameworks are here to stay with the promise of stability. React vs Angular – none of them can vanish from the air. The reason it possesses is both alternative have come up with great changes over the period in different ways.

The truth is, react has empowered the React developers to easily provide feedback and answers on new features, the share of tech stack overflow, watchers, immutability, nuisance, controls, and action on data changes. On the other side, after Angular 2 and Angular 4 release, it has been witnessing a rise in utilizing rate multiple times.

When you see the difference of older versions of Angular to React, by using Angular, it was consisting of drawbacks as the final production bundle size was a lot smaller ones. Angular Ivy JSX links files also call for the response in hundreds of rapid hydration, something that the Angular team showed off and favor at I/O 2019. In fact, progressive Hydration uses Ivy to load into the server-side rendering and network slowly.

So, Ivy appears to be the kind of main priority for Angular and the vision is to make it usable for all applications in terms of bundle size budgets.

When you talk about the React event conference held in 2019, the react team has been focusing on Suspense which is React’s way to orchestrate code, details graph, and picture loading. This benefits web components to wait until they make it. This only makes sure that it is not going anywhere anytime soon.

Angular or React for your app? Can’t decide?

Our expert team will help you pick suited tech to your project.

FAQ About Angular vs React

So, which one is better Angular or React?

Nothing is less and nothing is more. We think that’s the best suitable answer for which is the best framework. Our department as an app development company as sufficient experience with React and Angular frameworks, so we can say you can’t go far wrong with any of them. Of course, as a developer, which one you need to pick depends on the degree of tenacity, development experience, and comfort.

If you are effective at one of those, then the mobile development time would certainly be reduced – irrespective of what you use – Angular vs React for mobile app development. The project requirements will be simpler to pick even for a freelancer.

However, if you are not sure of anything, you either as a React developer or Angular developer, should build a minimum viable product at first sight and observe the behavior and perspective of consumers. If everything goes well, you can launch the final product afterward. By this, you will be at a bit less risk and at more profit.

Therefore, the conclusion you’d create is that you need to like and value engaging with web apps even if you’re a new kid on the block. So if you are having some questions, queries, opinions, voices, or ideas for building an app and selecting platforms, you can always contact us for discussions.

Our development team will direct you and address your questions and thought as soon as possible. Good luck!