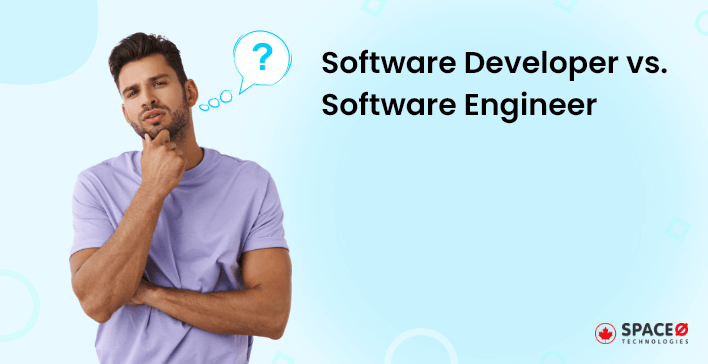 Software developers and software engineers may seem almost similar to each other. However, there is a thin line of differences that sets them apart from each other. If you’re from an IT background and not sure which career to choose, you are in a right place.

With this blog, we aim to provide you with insights to decide which one is right for you. Let’s start with a software developer.

Who is a Software Developer?

Who is a Software Engineer?

Want to Create Your Own Software?

Get in touch with us. Tell us your idea, validate your business requirements, and get a 30-mins free consultation.

Let’s understand some of the essential differences between software developers and software engineers.

What Does a Software Developer Do?

Here are the basic responsibilities of a software developer.

What Does a Software Engineer Do?

Here are the basic responsibilities of a software engineer.

To become a software developer let’s understand what technologies should they know.

Let’s understand the skills of software developers and software engineers in detail.

Here are 16 essential qualities that software engineers must possess-

Contact us. Discuss your idea with our software development consultant and get a customized quotation as per your requirements.

Roles and Responsibilities of Software Developers and Software Engineers

Let’s understand what the roles and responsibilities of software developers and software engineers are.

Roles and responsibilities that software developers fill in are-

Software engineers are adept at fulfilling these roles and responsibilities –

Software Developer vs Software Engineer: Which One to Choose for Your Career?

A software engineer and a software developer have similar traits to them. They both need to balance their technical skills with logic and creativity. Their skill sets intertwine on numerous occasions.

But again, rather than standing against each other—software developer vs software engineer, these roles complement each other. All in all, in any organization, it is always better to have a balanced team of software engineers and developers to bring about the success of the software project building process and the final product.

In one look, they both may look the same, but there are some stark differences between software engineers and developers. A software engineer implements systematic solutions to more significant problems. Software developers create functional applications for direct consumer use.

Software developers and software engineers work in tandem with each other and the best success comes when you have both to work on your software project. So it’s ideal to not choose one. Does that mean you should hire both in-house? Not really! You could instead rely on experienced teams with proven work experience who already have capable software developers as well as software engineers. That way you onboard experts for your software project without having to drain efforts and cost in hiring in-house employees. You could then get exceptional results using fewer resources.