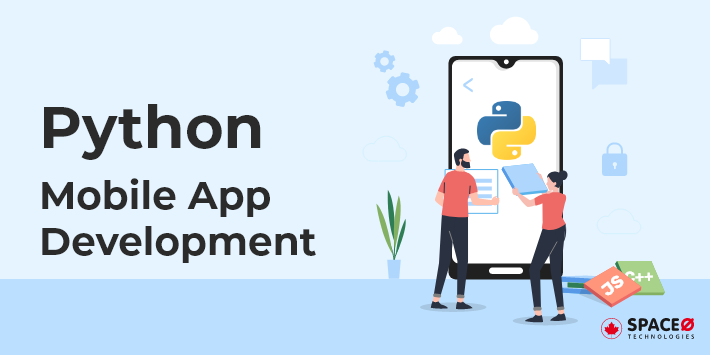 Innovation is inevitable in our fast-paced world. The field of software development is undergoing major evolution with demands for apps rising every day. On the programming language front, Python is in the hype for all the right reasons.

According to Statista’s survey, Python was the most desired language, with 30 percent of respondents saying that they want to learn it.

Python is already a cult favorite. With the growth and demand for machine learning, IoT, AI, and Big Data, and the need to build reliable systems, Python is being picked up by many organizations as their standard programming language.

But what is Python?

How flexible is it when it comes to Python app development?

Is it scalable in building large mobile applications?

Let’s figure this out as we take a closer look.

Python is a high-level, platform-independent programming language most commonly used in backend development. It is cross-platform compatible meaning Python programs can run on any operating system (macOS, Windows, Linux).

Python is also simple in structure and faster to code, reducing the number of written code lines. This also leads to great clarity of Python programs.

Few of the popular frameworks of Python include:

It is a library framework built for web development. Django is also arguably the best Python framework as its features like authentication, SE optimization, and versatility, aid in building complex but functional web applications swiftly and efficiently.

CherryPy is a popular web application framework that has built-in support for testing, profiling, and more. It is also highly flexible because any template/graphics engine and ORM can be used with it, making it a desirable framework.

A web framework that is most suited for massive web applications. Flask features include a fast debugger, integrated unit testing, a lightweight design for flexibility, and an in-built development server.

Web2Py is a free open-source web framework that supports smooth server-side development. The core libraries of Web2Py are the template language and the Database Abstraction Layer. It is also a highly lightweight framework.

Need a Python expert to develop a mobile application? Get in touch with us

Want to validate your app idea? Want to get a free consultation?

Why Python for App Development 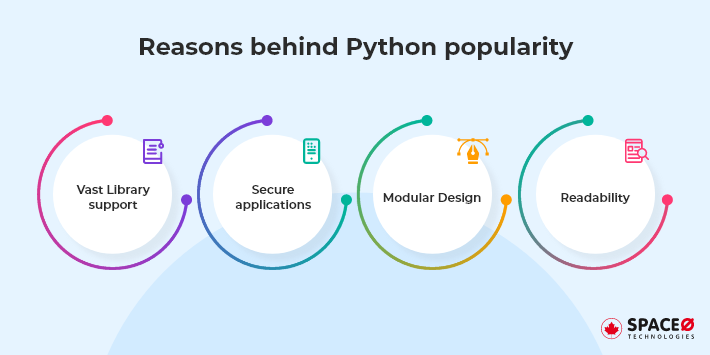 Unlike in the past, Python has been equipped to aid the development of multi-type applications. The following are some of the reasons for the incredible popularity of Python –

Building any mobile application may require the use of multiple libraries, making sure no code is redundant. This makes programming in Python comfortable and leads to reusability.

Applications built-in Python are more secure, helping to prevent the damage caused due to cyber attacks.

Being an object-oriented language, Python is highly modular. A mobile app can be divided into several parts or modules, which can then be developed and tested separately before combining into a large mobile app. This also makes the testing and debugging process much easier.

It goes without saying but if a language is complex and proves difficult to understand by mobile app developers, then it will no longer be preferred for real-time mobile app development.
Python, on the other hand, is probably the best at readability.

The syntax of Python is simple enough for any beginner to pick it up and build a mobile app from scratch without much effort.

What are the Popular Python Frameworks for App Development? 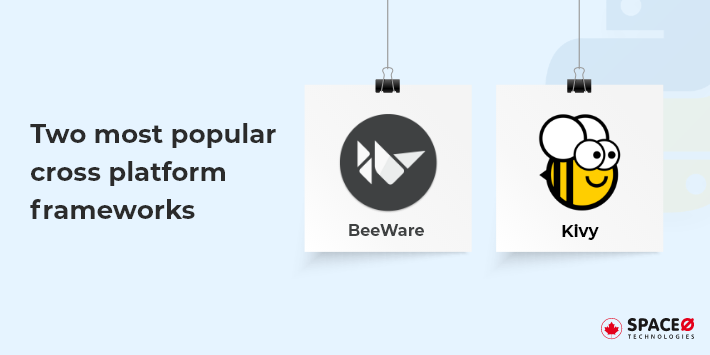 One of the key reasons Python can be favored for mobile apps is to maintain uniformity. A mobile app becomes easier to develop and maintain when both the backend and frontend are written in the same language. The testing of such applications also becomes quicker.

The extensive knowledge of a single language alone can mean the difference between a frontend/backend developer and a full-stack developer.

In Python, the two most popular cross-platform frameworks that get this job done are Kivy and BeeWare.

Kivy is one of the best Python mobile app frameworks and open-source GUI framework library developed in 2011 that supports cross-platform Python development for mobile applications.

The Kivy framework also ensures the application does not need to compile after any change is made. Since it is built using OpenGL ES2, the framework supports GPU acceleration in its graphics library.
Kivy is also event-based like many GUI frameworks, responding to mouse events, key presses, and touch events. It also uses an intermediate language, KV, for custom drawing its widgets and controls.

Using Kivy means giving the users a custom feel to applications as it does not use any of the native widgets or controls. This ensures the portability of the app as it will look the same on all devices.

This can also be a major disadvantage to using Kivy as the “native” feel of the app is lost. Although this does not come in the way of most game apps, the game’s design will take more priority. For simple applications, this could arise as a problem.

But for the majority of applications, the framework’s consistency and functional capabilities will suffice in choosing it for development.

The motto of BeeWare is ‘Write Once Deploy Anywhere’, and rightly so. BeeWare is a popular GUI framework that is favored for native Python Apps. It provides a rich and native UI toolkit.

Native OS widgets and controls are used for rendering by the framework. So an app will look like an Android app on Android, an iOS app on iOS, and so on.

It is relatively new but the support and community for BeeWare are assuring to know that BeeWare can one day be the preferred app-building framework in Python.

Before starting any application in BeeWare, the Briefcase tool has to be installed. This tool allows a new application to be loaded and created and also to package the finished application to end-users.

When bootstrapping a new application using Briefcase, a skeleton structure of a standalone Hello World project is created which can be run without any changes. The structure can look something like this with the src folder holding all the source code.

On running this application a GUI window with Hello World written will be displayed. 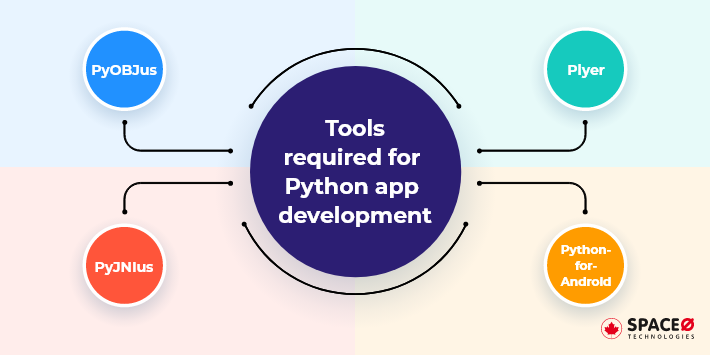 Now that we know the pros and cons of different types of Python frameworks used for mobile development, let’s look at some of the key tools that we may require if we were to build a mobile application using Python.

It is an open-source tool originally developed for the Kivy framework.

Python-for-android allows packaging Python code into an independent, standalone Android APK which can be then transferred, installed, or even uploaded to the Play Store.

In PyOBJus, the auto class function is the highlight as it loads the Objective-C classes into PyObjus which then wraps these objects using Python.

In many mobile applications that we use daily, access to native mobile features such as camera, flash, GPS, etc, are required. Plyer can be described as a platform-independent API that uses these features in Python. Depending on the platform that it is run on, the external library called by Plyer will also be different.

What Type of Apps Can be Built Using Python? 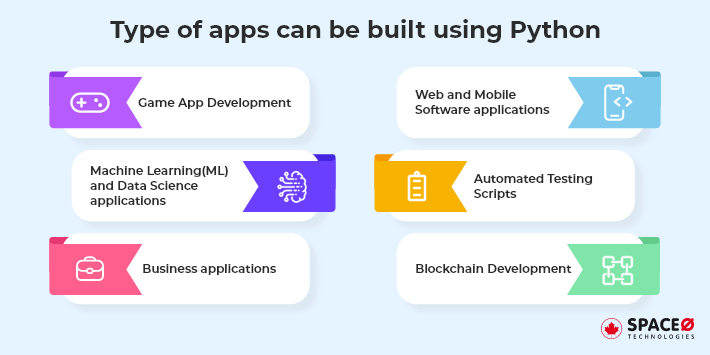 So far we have talked about the features of Python, its frameworks, and two specific frameworks for mobile applications.

Now let’s look at some of the applications (use cases) that can be implemented using Python from scratch.

Python can be implemented as a game development language.

Battlefield 2, The Sims 4, Bridge Commander are some of the many games built upon Python.

All of the previously introduced frameworks support the development of web and mobile applications.

Writing and implementing test cases require that you, as a tester/programmer/ developer, need to write code that is highly explanatory and should be, above all, readable, all of which is possible in Python making it a great choice for testing.

Frameworks like Robot are exclusively used for testing in Python.

Machine Learning and Data Science technologies are guided by complex algorithms and methodologies.

By using features of a versatile and efficient language like Python, data scientists and developers can focus their attention on solving the problem at hand instead of focusing on the complexities of a language.

One of the most popular business management software, Odoo, is built entirely using Python, once again demonstrating its ease to build complex and logical applications.

This decade’s ruling technology is, undeniably, blockchains. Blockchain can hence be quite complex to handle. But developing it in Python can make it simple as Python itself is simple and easy to handle.

Using frameworks like Flask and free packages provided by Python, developing Blockchain applications will hence be a breeze.

Ready to hire a Python developer for your business?

What Are the Famous Applications Built Using Python?

Python’s popularity has led to some great innovations in the past couple of years.

Some of these apps are the ones that we use religiously every day to connect, socialize, image-search, and do a lot more.

Now to address some of the most common questions surrounding application development in Python.

A 100% Yes. Python is a very multi-faceted programming language with a vast array of libraries and packages built to support a variety of applications. Whatever your use case, developing it in Python will reduce costs due to fast and reliable development.

Yes. As mentioned earlier, many successful and famous mobile apps like Instagram and Spotify were built from Python. Not only that, the advancements in frameworks like Kivy and the BeeWare project make it a great choice for mobile app development.

Yes. Python is a multi-platform programming language. Both Kivy and BeeWare also support cross-platform development and implementation. Both these frameworks built an application that can be run on Android and iOS.

The popularity of Python doesn’t seem to die down any time soon and with new mobile apps being built every day, the scope of this programming language only seems to be increasing.

mobile application development will not take much time to become industry standard and once it does, the demand will rise even higher. Hence choosing Python as your all-inclusive language may not be such a bad idea after all.