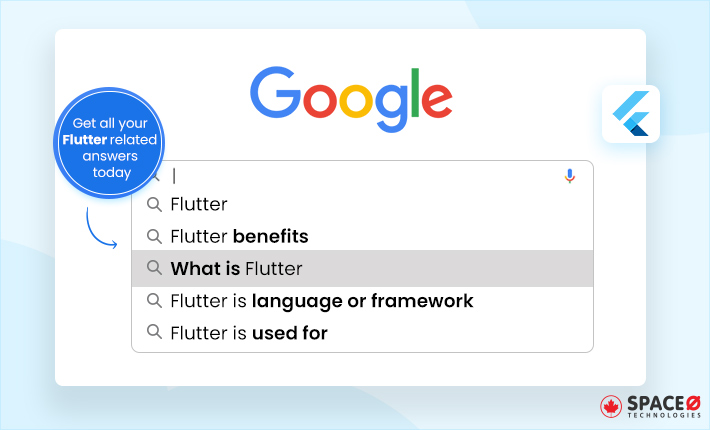 Read this blog if:

You might be surprised to know that around 42% of global app developers use Flutter, and even Google has used Flutter in its own app, Google Pay. 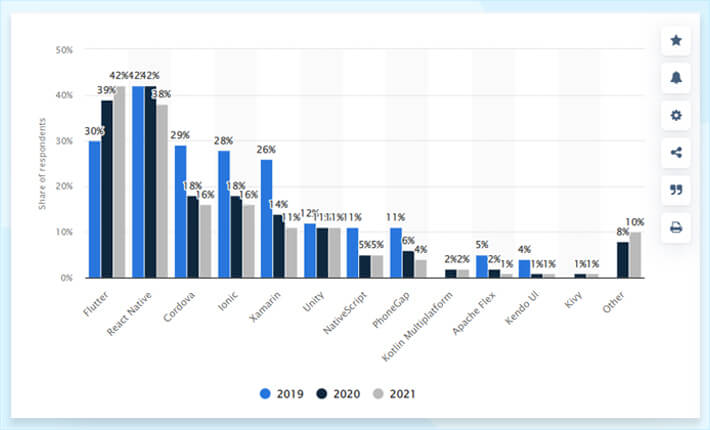 Have you used the Google Pay app to make online transactions? If yes, you know how fast and interactive-UI this Flutter app has!

So, to create cross-platform mobile apps that offer native-like performance, Flutter is the best choice. But, how?

Let’s discuss by knowing almost all the information about Flutter from business as well developers’ perspectives.

Flutter is a framework developed by Google to create web apps, mobile apps, and embedded apps using a single technology. Flutter mobile apps perform well and can compete with native mobile apps. The first release of Flutter came in 2017, and the Flutter project was started under the name of Sky.

In other words, you can use this single programming language-based framework and develop a single code base for mobile apps for two different platforms, i.e., Android and iOS. Currently, Flutter framework is a top mobile app framework for developing Android and iOS apps in the market. By hiring dedicated Flutter developers, you can create a single mobile application for both platforms.

You can check a short brief on the history of the Flutter mobile app framework in the following image.

Which programming language is used in the Flutter framework?

It is a programming language that helps developers in client-side and web server-side development. Dart was developed by Google and is an object-oriented, class-based, and garbage collected language with C-style syntax.

Being a leading Flutter app development company in Toronto, Canada, we have experience in developing mobile apps with Flutter. Check our on-demand ride-sharing app that is built for the USA audience with Flutter technology. So far, this app has completed over 5K+ rides as well as has 2K drivers.

How Does Flutter Work?

Flutter apps use the Dart language, and it allows to compile the app code ahead of time into a native machine code (iOS/Android). Then, the rendering engine (built with C++) converts app code into Android’s NDK and iOS’s LLVM. Both the pieces of code are rendered into the wrapper Android and iOS platforms and results into .apk or .ipa files for final output.

Next, we are going to check the reasons why Flutter is the best framework for app development.

Why Should You Use Flutter for App Development?

To give you reasons why you should use the Flutter framework, we have divided this section into two parts.

Let’s quickly check some of the statistics on the Flutter framework trend. 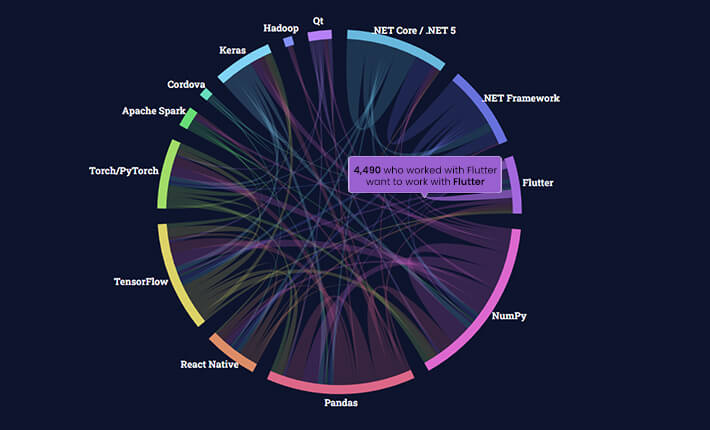 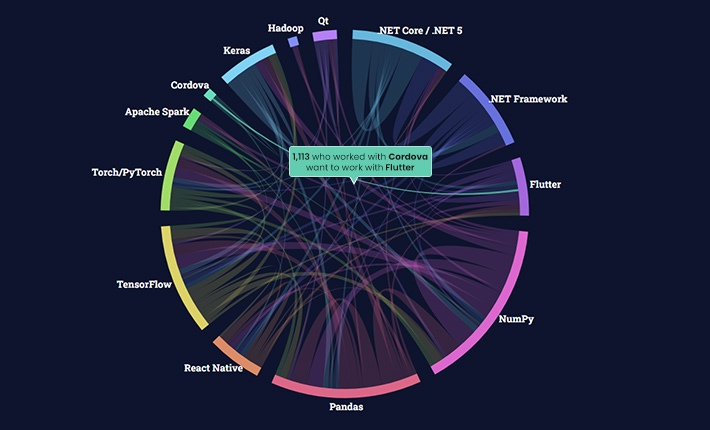 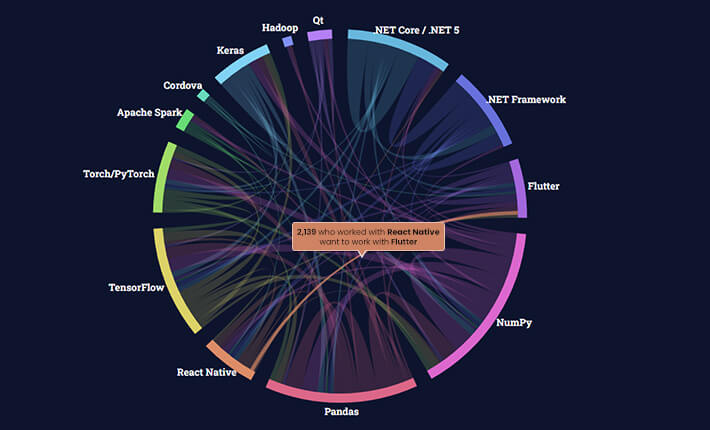 The above statistics describe that developers who are working with different frameworks or technologies also want to use the Flutter framework. Being one of the trending technologies to create native mobile apps, Flutter is used in more than 50,000 mobile apps, and these apps work on both platforms – Android and iOS.

Let’s have a look into the features of the Flutter app development framework.

Flutter helps developers to develop fast and scalable apps. Following are the features.

Flutter’s widgets reduce production work, and from the business point of view, it is beneficial to launch the product in the market as soon as possible. The native ready-made widgets lessen the work of developers by ensuring there are no or little compatibility issues of components with different OS versions of apps. Flutter has all the essential resources to develop native-like apps. In addition, Flutter doesn’t use OEM widgets like React Native. Instead, it uses its own ready-made widgets. The benefit you get is that the developed application offers the same performance on each platform.

Developers take less time to create applications compared to other frameworks or programming languages. Because Flutter apps are quicker to write and require less time and effort to test and launch apps into the market. So, if an entrepreneur wants to test an app idea, Flutter becomes a feasible option to build an MVP version of the app idea. Also, less time means you will be charged less.

Low-cost app development with Flutter is another advantage of Flutter. It provides better app development work and results in fewer man-hours to develop an app because of a single codebase. Thus, the cost of developing a mobile app is lower compared with other native development.

In fact, the GooglePay team has used Flutter to re-built the GooglePay app from scratch that is identical and has similar functionalities across the platforms. It helped them to do more in less time make the app scalable and don’t need to invest much money by hiring developers for iOS and Android versions separately. The following are the advantage GooglePay got.

So, now you understand when to use Flutter, moving further you will know the advantages of Flutter for developers.

Connect with us. Discuss your project requirements, and our Flutter team will help you build a scalable, fast and beautiful app.

What are the Advantages of Flutter for Android Developers?

Flutter development is faster and more dynamic for creating a mobile application from scratch that is compatible with multiple platforms. This is possible because of the hot reloading feature. It takes only a few milliseconds to reflect the real-time changes when developers add features, fix bugs, or create code of user interface. It allows developers to check the results on the spot and reduces the time barrier in the development process.

Flutter uses the declarative style of developing the user interface of the application. Using these structures, developers get the flexibility to apply various methods to manage the state of the application as per needs. Flutter is a framework that presents a layered architecture and allows developers to perform full customization and fast rendering. Almost all the components of this framework are in-built and easy to use.

In any framework, UI is an essential part as it provides the look and feel of the native apps. Although Flutter doesn’t offer many third-party components. But, it has in-built components that are valuable to develop apps. Technically, in-built components are completely similar to native ones even if they offer an experience very close to the native applications. The widgets available in the Flutter helps developers to reduce the coding time. Also, developers get the flexibility to create custom widgets as per requirements and use them for product development.

With Flutter, the testing process becomes easy and only requires 50% time to do testing of mobile apps. Flutter offers a set of features to perform testing and also offers widgets testing to run unit tests on the UI of the mobile applications.

What are the Limitations of Using Flutter Framework?

As you saw Flutter has many advantages for businesses to take off, but you should also know the limitations of using Flutter.

Flutter is relatively new compared to other cross-platform languages and frameworks. Flutter has various libraries that fulfill the purpose of developing apps. However, there is a limitation of Flutter libraries as compared to Xamarin and Cordova. For example, when an app needs highly specific functionality, it results out that there’s no third-party library available for support. In this case, developers need to write code by themselves to complete the development of the product.

Web apps or instant apps need to be of small size because Google permits an application size around 10 MB. At the same time, apps built with Flutter are often more in size, around 20 MB even after optimization.

Suppose, you want to build an app that majorly needs to interact with a hardware device over Bluetooth, then Flutter is not a viable solution. Developers have seen some connectivity and performance issues because it does not use natively built Bluetooth of the device.

Let our experienced Flutter developers help you to develop a scalable solution. Get in touch with one of the technical professionals.

Next is the frequently asked questions section. If you are looking for more information about the Flutter framework, check the following section.

Here’re some of the top applications built with Flutter: 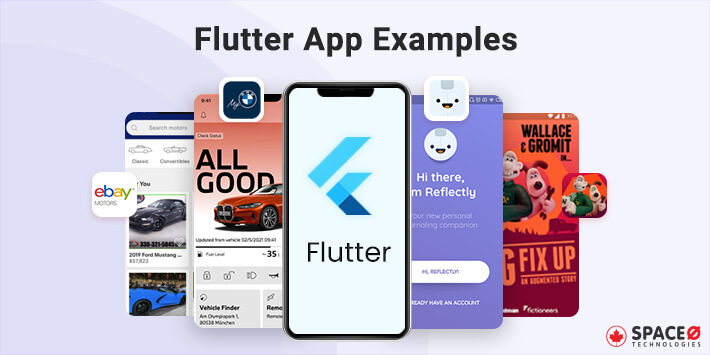 Yes, it is possible to create web applications and desktop apps using Flutter. The single code gets compiled and also works on the web.

Both frameworks are best to build mobile apps. Flutter is famous because of its easy-to-use feature while React Native is famous for developing personalized UI of mobile apps. To get more details, check the in-depth comparison between React Native vs Flutter for complete understanding.

Flutter is an SDK for creating cross-platform applications while Java only supports to development of Android apps. Java is a programming language used for creating desktop, mobile and web applications. Whereas, Flutter is a framework that helps to develop a mobile app for different platforms, i.e, iOS and Android.

From this blog of Flutter definition, you got an idea about the Flutter framework, its benefits, and use case scenarios. Now, you know how Flutter apps are scalable and fast in performance.

Flutter is one of the most innovative mobile technologies and competes with Xamarin and Cordova framework to build cross-platform mobile apps. As Flutter is developed by Google, Android developers are taking more interest in using this framework.

If you have an idea to develop a mobile app in Flutter, let our technical professional help you. Space-O Canada is a top Flutter app development company in Canada, which has experience in developing custom mobile solutions. Get in touch with us.