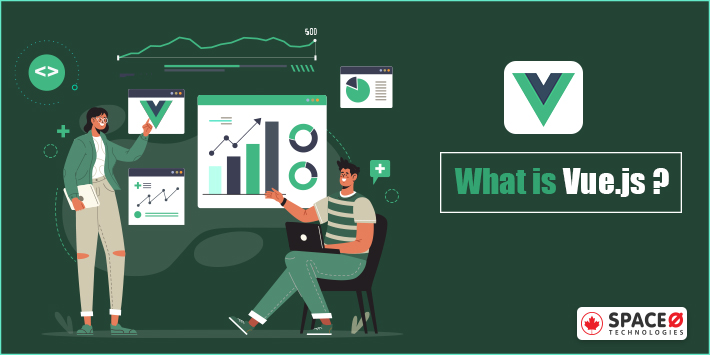 For years on end, JavaScript has provided an ecosystem within which frameworks have thrived. It has provided developers with fundamentals that have been used for smoother web development. With 4.4 million monthly downloads on NPM and 138K GitHub’s stars, Vue has created a buzz within the web developers community.

During the course of this guide, we will run through what is vuejs, the pros and cons of the Vue framework hosted on JavaScript. And how you can incorporate this framework into your infrastructure.

A progressive framework for building and one-page applications, Vue is developed for JavaScript. It has been designed for scalability and incrementality along with being easy to integrate with other libraries focused on the view layer.

Vue has created a buzz in the web applications development ecosphere and is revolutionary in the sense that it has multiple use cases. It can be used to develop both desktop and mobile-based applications.

HTML extensions in addition to the JavaScript base have quickly seen Vue rise to a favored front-end tool that is being adopted by top tech companies like Adobe.

What is Vue.js Used For?

A progressive JavaScript framework used by web developers for the creation of frontend user interfaces for web-based and hybrid mobile applications. It is an integration of the efficient concepts of Angular and React frameworks and delivers it in a simple, minimalistic modern design. You may also like to see the difference between Vue and React js Framework.

Need a Vue.js expert to develop a one-page application?

Get in touch with us today!

In essence, Vue corresponds to an MVC (Model-View-Controller) architecture and can be used in coherence with different architectural frameworks like CBA (Component-Based Architecture).

This ability to interact with various available frameworks has made Vue highly popular in the web development ecosystem.

Here are some advantages:

Ready to hire a web developer for your business?

The Way Ahead for Vue.js

Considering stiff competition by other frameworks, Vue.js must adapt itself conceptually so as to flourish within the website development ecosystem. In addition to its main case use of building one-page reactive applications, its infrastructure can also be used for a number of tasks:

Started in 2013 by Evan You, Vue.js is one of the most demanded JavaScript frameworks in today’s times. Developers appreciate Vue’s easy-to-use syntax, clean formatting styles, and good frameworks that are compatible with other infrastructure as well. It certainly lives up to its expectations and the function it’s designed to be incrementally adoptable and to cater to, succeeding where other frameworks fail.

So, if you want to build one-page applications with some basic or advanced features and functionalities, you can get in touch with us through our contact us form. We are a leading web design and development agency based in Canada with a team of experienced web developers. Just fill our given form and one of our experts will get back to you shortly.